Jawaharlal Nehru University (JNU) today asked a group of students to cancel the screening of the controversial BBC documentary on PM Narendra Modi. A statement from the university administration said that the students were reportedly planning a screening of the documentary “India: The Modi Question” at 9 pm last night (January 24). “No prior permission has been taken from the JNU administration for this programme,” the statement said.

Significantly, the central government has blocked access to a two-part documentary by the British Broadcasting Corporation (BBC), which claimed to have investigated some aspects of the 2002 Gujarat riots when PM Modi was the chief minister of the state. . “Such unauthorized activity may disturb the peace and harmony of the university campus, therefore the students/individuals concerned are strongly advised to cancel the proposed programme,” the JNU statement read. 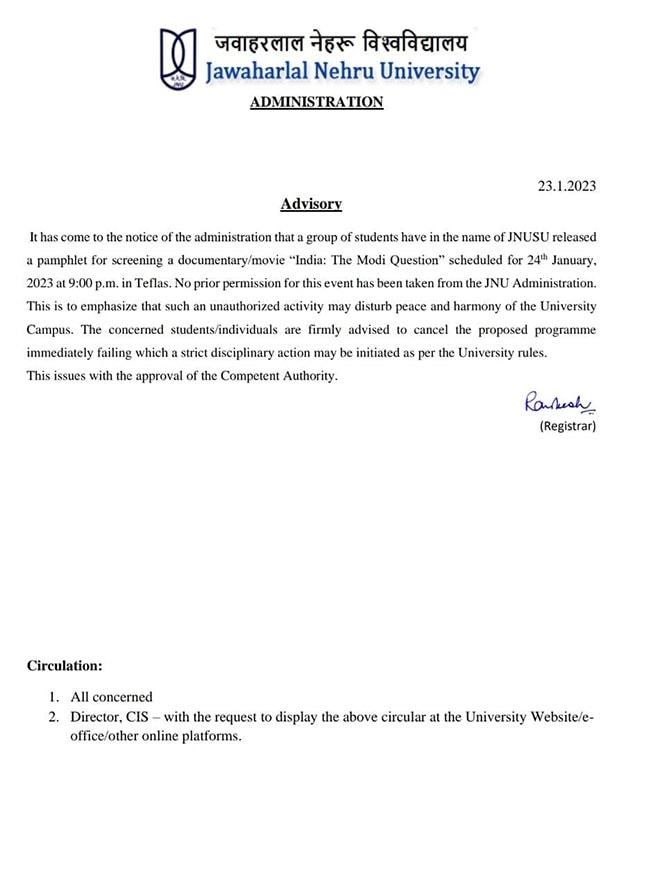 The central government on Friday ordered the blocking of tweets sharing a BBC documentary critical of Prime Minister Narendra Modi. The tweets through which the YouTube link of the BBC documentary has been shared have also been blocked. The Ministry of External Affairs had described this BBC documentary as part of such propaganda which reflects the colonial mindset. Opposition leaders have fiercely targeted the Center on this issue. When Narendra Modi was the Chief Minister of Gujarat, there were fierce riots there. Significantly, the committee constituted on the instructions of the Supreme Court to investigate the Gujarat riots had given a clean chit to Narendra Modi. The committee did not find any evidence against Modi in the case.