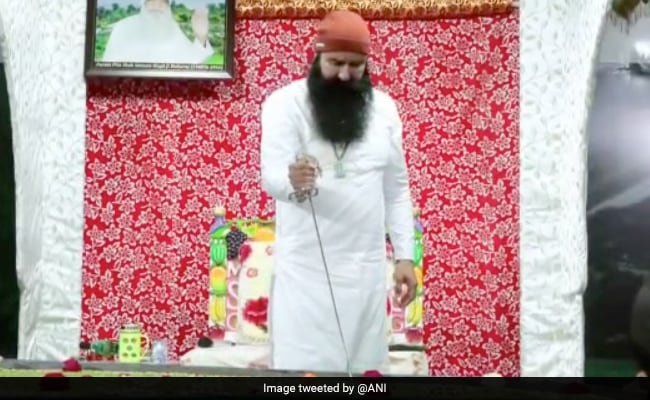 Dera chief Ram Rahim, who is serving a sentence in the case of Sadhvi sexual abuse and murder, has come out on parole for 40 days. After leaving Suneria Jail in Haryana, he reached Barnawa Ashram in Baghpat on Saturday. Now a video of Ram Rahim celebrating by cutting a cake with a sword is going viral on social media. In his bail application, Ram Rahim had said that he wanted to attend a program organized on January 25 to mark the birth anniversary of former Dera chief Shah Satnam Singh.

The main gate was closed as soon as Ram Rahim entered the ashram. It was told that the entry of Sadh Sangat inside the ashram has been banned. Jurisdictional Baghpat DK Sharma told that following the rules of parole, crowd will not be allowed to gather in the ashram. If rules are violated, action will also be taken.

Station in-charge Binauli Salim Ahmed told PTI-Bhasha that Honeypreet and family members have also come along with Gurmeet Ram Rahim. On the other hand, security has been given to Ram Rahim on his arrival in Baghpat district. Police force was deployed at the main gate of the camp. Now there is a strict police guard at the gate of the ashram.