India and Australia will take on each other in the 18th Match of the Women’s World Cup 2022 at Eden Park in Auckland. The Women in Yellow have been unbeaten so far in the tournament with four wins in four games and have been dominating the oppositions. The batting lineup has clicked really well while the bowlers seemed to have found their rhythm as well. Australia suffered a loss at the hands of India in the 2017 Women’s World Cup semi-finals and will be looking to stage their revenge back.

Meanwhile, India has had a roller coaster of a ride so far with two wins and two losses so far in their campaign and are placed at the fourth position in the points table. They suffered a painful loss to England in the previous game with their batting collapsing totally and the women in blue will be hoping to put up a better show this time around.

This will be the first game in the Women’s World Cup 2022 at Eden Park in Auckland and over the years, it has been a high scoring pitch. Both teams have some power hitters in their lineup and the match is expected to go down right into the wire. Any score more than 250 will be difficult to chase down considering the intensity of the game and the captain that wins the toss will be looking to bat first.

Rachael Haynes had a terrific outing with the bat in the previous game against West Indies and she has been batting beautifully at the top of the order for Australia as well. The 35-year-old scored an unbeaten 83 off just 95 deliveries in a low scoring affair against West Indies and has already scored a breathtaking century in the first game against England. She has the ability to shift gears quickly and is expected to continue her good run with the bat.

Ellyse Perry bowled some good lines and lengths in the previous game against West Indies and picked up 3 wickets for just 22 runs in her 8 over spell. She broke the backbone of the opponent’s batting lineup by bagging the top three batters which allowed Australia to have a stiff hold against West Indies. The world’s number one Women’s all-rounder will look to make the same amount of damage against India in the upcoming fixture. 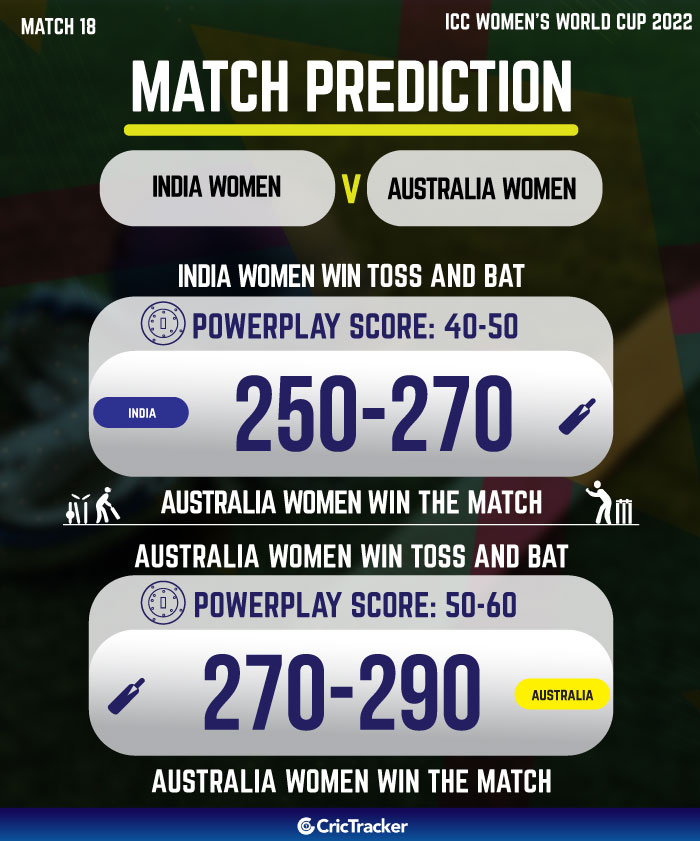