Chennai Super Kings will take on the Punjab Kings in their next encounter on April 3 at the Brabourne Stadium. The Men in Yellow have suffered two defeats in a row and Ravindra Jadeja has not been able to impress with his captaincy so far. However, CSK has been one of the most successful sides over the years and their talisman MS Dhoni is looking in good touch with the bat which is one of the positives. They will be looking to get off the mark in the points table with a win 0ver Punjab.

Punjab Kings, on the other hand, have had a mixed start to their campaign as they flourished really well against the Royal Challengers Bangalore in their first game in a big run chase but were completely outplayed in the next game against the Kolkata Knight Riders. However, they will be a lot more destructive side if their batters can stick around for a longer time and the bowlers will need to step up as well.

The Brabourne Stadium has hosted two games so far in the tournament and both have been relatively high scoring. Dew has been a massive factor in the night games and it is going to be very difficult to defend on the ground with the wet ball in hand. The captain that wins the toss will have no doubts in bowling first going by the results and the dew factor.

Shikhar Dhawan has missed two opportunities to get a big score under his belt and he will be keen to make up for it in the upcoming fixture. The left-hander endured a soft dismissal after starting off well and he can be a match-winner once he gets into the groove. Dhawan has been in prime form in the last two seasons of IPL and he definitely knows how to get back to his golden touch.

Rahul Chahar was one of the positives for the Punjab Kings in the previous fixture and certainly, he has been growing leaps and bounds. The leg spinner extracted a lot of spin from the track and picked up two important wickets of Shreyas Iyer and Nitish Rana to keep his side in the hunt. He finished his spell with 2 for 13 in his 4 overs with one maiden and will be looking to continue his good performance. 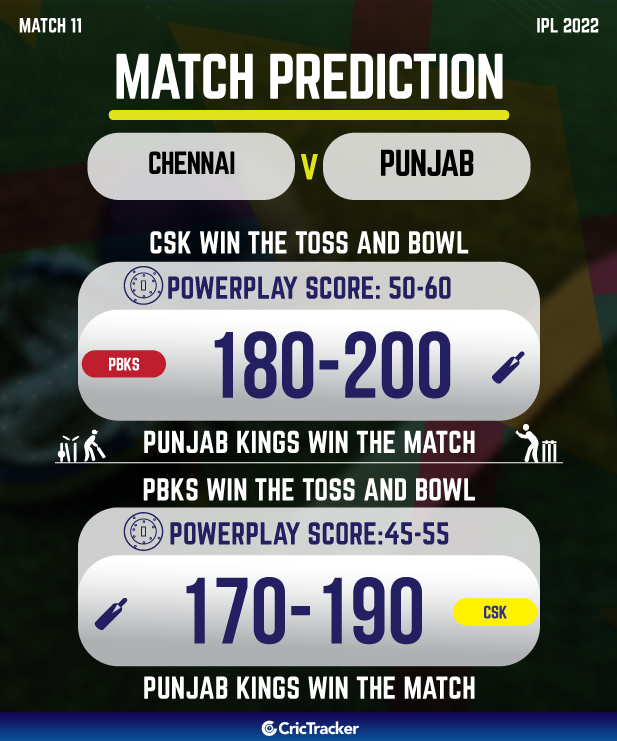