Sunrisers Hyderabad will take on the Lucknow Super Giants in Match 12 of IPL 2022 at the Dr DY Patil Sports Academy, Navi Mumbai. The Kane Williamson-led side looked completely unmatched to Rajasthan Royals in their first game and haven’t made a good start to their campaign this year. Aiden Markram’s half-century was one of the few positives while the express pace of Umran Malik will always be a potent weapon to have in the upcoming fixture.

On the other hand, the Lucknow Super Giants are coming off a big victory against the Chennai Super Kings following the huge run chase of above 200 against Chennai Super Kings in their previous encounter. The KL Rahul-led side has found a gem of a talent in Ayush Badoni who played an excellent cameo towards the end while it was the Evin Lewis’ monstrous hits that took the side home.

The Dr DY Patil Sports Academy, Navi Mumbai has hosted three games so far in the season and the pitch has been relatively unpredictable. Scores above 200 were chased down on the same ground as well as the Royals managed to defend 193 as well. However, dew will still be a big factor and hence, the captain winning the toss will bowl first to stay in the safer zone.

KL Rahul looked in good nick in the previous game when he scored a 26-ball 40 but failed to capitalise on the opportunity to get a big score under his belt. The right-hander hit three sixes and two fours in his quickfire innings and gave the much-needed start to the Lucknow Super Giants while chasing a big score. He will be hungry to add some more runs to his tally as he has been relatively quiet this season so far.

In a high scoring game in the previous encounter, Ravi Bishnoi was one of the standout bowlers as the wrist spinner conceded just 24 runs and picked up two wickets as well. He has been showing immense potential in the last few months and he is expected to play a vital role for the Lucknow side this season. The 21-year-old will be looking to continue his good rhythm in the upcoming fixture as well. 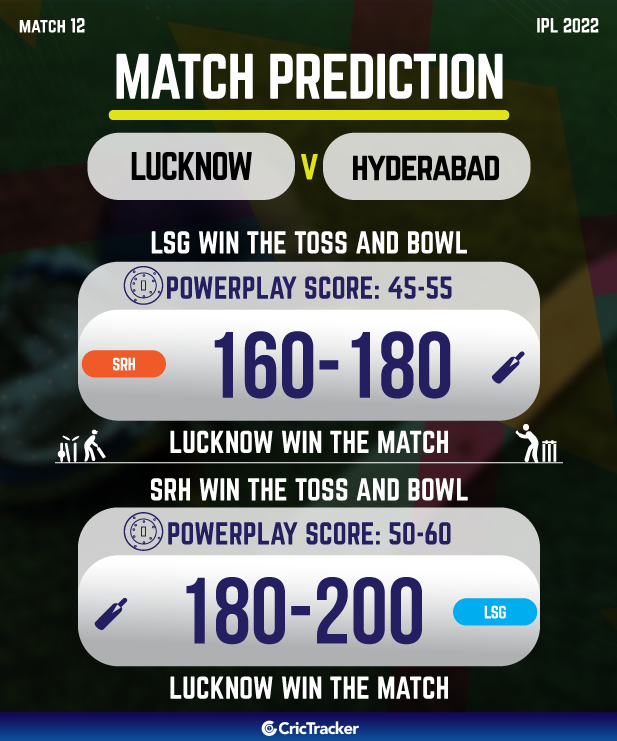