Kolkata Knight Riders are all set to take on the Mumbai Indians in their next encounter at the MCA Stadium in Pune. Both these teams have had a contrasting start with Kolkata Knight Riders winning two of their three games so far, while Mumbai are yet to get off the mark in the points table. The Shreyas Iyer-led side has been dominant in both the batting and bowling departments so far in the three games and they are likely to be bolstered by the return of Pat Cummins into the line-up.

On the other hand, Mumbai have lost both the encounters so far in this season and is desperate for a win in the upcoming fixture. Not a lot has gone their way in terms of the decision-making and the inexperience of Basil Thampi in the bowling setup hasn’t helped either. Tim David hasn’t fired yet for Mumbai Indians in the cash-rich tournament either. However, the positives are Ishan Kishan and Tilak Varma are looking in really good touch.

The conditions have started to settle a bit in the last few games in the tournament as teams have been able to defend scores but still the dew will be a considerable factor in the night fixture. A run feast could be expected with both teams having some powerful strikers of the cricket ball and the captain that wins the toss will stick with chasing first which has been the trend so far.

Shreyas Iyer has looked in really good touch in all the three games he has played but has thrown away his wicket after a good start to keep the scoring rate up. The right-hander has scored 59 runs in the three outings but has played some fantastic shots in his stays at the crease. A big innings is round the corner for him and there haven’t been doubts over his captaincy potential as his decision-making has been of the highest order.

Umesh Yadav has been the story of the tournament so far with the way the right-arm seamer has been giving breakthroughs in the powerplay and has managed to bowl some outstanding spells. Yadav picked up a four-wicket haul in the previous game against the Punjab Kings and continued his impressive run with the ball. He is the current Purple Cap holder with eight wickets to his name and will be looking to add some more to his tally. 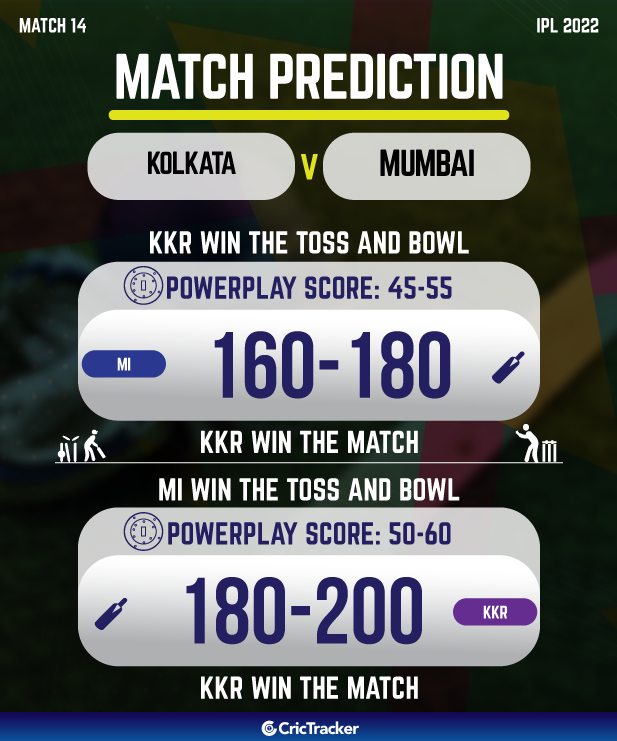