Gujarat Titans will take on the Royal Challengers Bangalore in their next encounter at the Brabourne Stadium. Both teams have had contrasting results in their last few games and RCB will need to reassess their batting department which has been continuously failing. The poor form of Virat Kohli hasn’t helped the cause for the Faf du Plessis side while Glenn Maxwell has shown signs of inconsistency. With five wins in nine games, RCB is at the fifth position in the points table at the moment.

On the other, Gujarat Titans pulled off yet another close game in their favor and got back to the top of the points table with seven wins in eight games. The Hardik Pandya-led side has found different match-winners in each of their wins and it has been an excellent campaign for the new franchise so far.

The lowest total of this edition’s IPL was scored in the previous game at the ground as the RCB side was bundled out for just 68. However, the pitch hasn’t been bad for batting, and there arent’ demons as well to make it a low-scoring wicket. The captain that wins the toss is likely to bowl first despite the heat belting down in the afternoon games.

Hardik Pandya was beaten for pace in the previous game against the Sunrisers Hyderabad, and he is expected to make up for the failure in the previous game in the upcoming fixture. The all-rounder has already stacked up 305 runs in seven games and has enjoyed his promotion in the batting order so far.

Alzarri Joseph clocked some really good speeds in the previous game against SRH and almost went past the pacer Umran Malik for the fastest delivery on the day. He has been quite effective at the back end and has taken a lot of important wickets for the Gujarat Titans. The West Indies seamer will be crucial to the plans of Gujarat Titans this year. 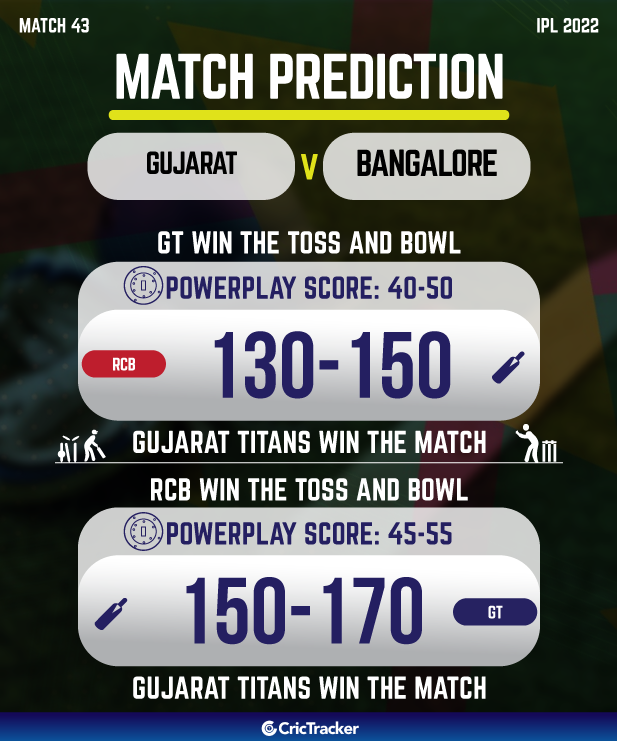 To know better the analysis of teams, be sure to check out our latest IPL points table 2022 update.