After a very disappointing season in the 15th edition of the Indian Premier League, the Chennai Super Kings have begun the process of restructuring their team for the future. Robin Uthappa, one of their most impressive players from last year has already announced his retirement while one of IPL’s greats, Dwayne Bravo was not retained by the franchise ahead of the mini-auction on December 23.

Certain reports also claim that the next edition of the marquee tournament will be captain MS Dhoni’s last and thus, there will be a lot of focus on Chennai Super Kings in the coming edition. With four titles in their bag, the franchise is the second most successful team in history but their recent form is a bit concerning. Consistency is one such factor why the Chennai-based team couldn’t live up to the expectations in the previous season but now, without bio-bubble and Covid-19, the team will make their long-awaited return to their den, Chepauk and that’s going to be a massive boost for the team.

More so, because of the squad they have built over the years, the domestic players are well-accustomed to the conditions in Chennai and Dhoni, who very well knows how to use his spinners will be extremely dangerous on their home turf. With that, the question arises, how can Chennai field their team in the 16th edition of the Indian Premier League? Without further ado, here’s Chennai’s Best XI among all the retained players. The 25-year-old Ruturaj Gaikwad has been sensational in the cash-rich tournament. In 2021, the Pune-born cricketer became the first-ever uncapped player to win the Orange Cap and in 2022, even though his form dipped, the opener scored 368 runs in 14 matches.

Gaikwad is known for giving Chennai a rock-solid start and if he manages to continue with that, Chennai can post a hefty score after 20 overs. Being one of the youngest players in the Chennai squad, his agility in the field is eye-catching as well and with the bat, CSK will depend a lot on him in the upcoming season.

The youngster will also be hungry for runs as despite performing well in the IPL and for Maharashtra in the Vijay Hazare Trophy and Syed Mushtaq Ali Trophy, he isn’t getting enough opportunities in international cricket. He currently is in tremendous form in Vijay Hazare Trophy, scoring 164 runs in two matches, which includes a century against Railways. 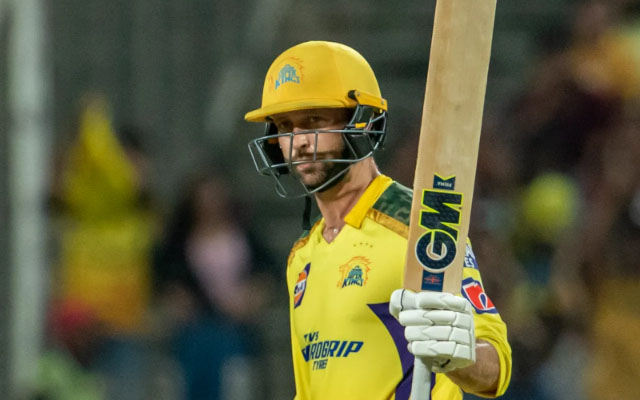 The dashing New Zealand international Devon Conway was phenomenal in the limited number of matches he played in the last edition of the tournament. The 31-year-old smashed 252 runs from seven matches at an impressive strike rate of 145.66.

With Gaikwad holding one end, Conway will have the freedom to explode right from the first ball and thus, can be extremely dangerous up front. Even though he currently isn’t in great form, the series against India can definitely change that.

Other than being a destructive batter, Conway is terrific on the field. In case captain MS Dhoni misses out, Conway can keep the wickets as well. 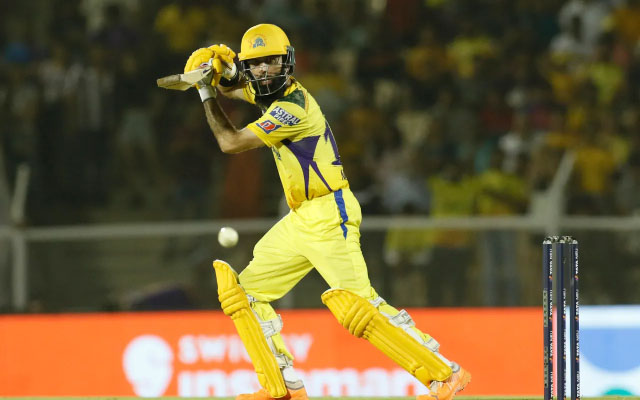 Moeen Ali has been arguably Chennai’s best acquisition in recent history. Hailing all the way from England, the all-rounder plays a crucial role in Chennai’s set-up. He loves to take on the opposition and give Chennai a solid start which their middle order later capitalises on. With the ball, the 35-year-old is extremely effective and he is the kind of player who’s very consistent with his performance – something that Dhoni or CSK management really appreciates.

In 2022, Ali scored 244 runs from 10 matches at a strike rate of 137.85. With the ball, he picked up eight wickets at an impressive economy of just 6.63. He restricts the opponent in the middle overs and in Cheapuk, where the ball turns, Moeen Ali can be Dhoni’s go-to option.

His current form, however, can be a little bit concerning. England skipper Jos Buttler doesn’t let him bowl much while his batting numbers are not looking good. He scored just 111 runs in his last seven T20 knocks but the positive thing is definitely that Moeen will have enough time to return back to his absolute best. The veteran Ambati Rayudu is arguably the pillar of Chennai’s batting order. Over the years, the 37-year-old has proved his class in Chennai colours and is irreplaceable in their batting unit. Be it in the role of an anchor or smasher, Rayudu has the ability to swiftly shift gears in the gentleman’s game.

In 2022, Rayudu couldn’t live up to his potential but has played certain match-winning knocks for Chennai before. In 13 matches, he scored 274 runs at a strike rate of 122.32. Overall, in the history of the marquee tournament, Rayudu has played 188 matches and scored 4190 runs, which eventually proves the kind of damage he can cause.

However, like many of Chennai’s top-order batters, Rayudu’s form is a bit concerning. Batting at number four for Baroda in the Vijay Hazare Trophy, Rayudu managed to score 102 runs in four matches. In T20s, his numbers further dipped with just 107 runs from six matches. Shivam Dube is given a free hand by Chennai Super Kings management to play an aggressive brand of cricket. He was impeccable in certain matches in 2022 and if he manages to remain consistent, Dube can be really dangerous in the middle.

In the last season, the all-rounder scored 289 runs from 11 matches at an impressive strike rate of 156.22. He is someone who provides a lot of flexibility and can bat anywhere in the order but if given a clear role, Shivam Dube can be a runaway match-winner. Now, despite being a handy bowler, neither Ravindra Jadeja nor MS Dhoni trusted him but if given a chance he can bowl a couple of overs in between.

Coming to his recent form, Dube was terrific for Mumbai and eventually helped his team win the Syed Mushtaq Ali trophy at Eden Gardens. His cameos with the bat were extremely crucial and if he manages to play a similar kind of role for Chennai, the 29-year-old can be an asset for the team. The heart and soul of the Chennai Super Kings, MS Dhoni will probably take the field for the last time in his career. His name is synonymous with the CSK brand and if indeed this will be his last season, Captain cool would love to walk away with the trophy and match Rohit Sharma’s legacy of being the captain with the most number of IPL trophies.

In 14 matches last year, the 41-year-old scored 232 runs at a strike rate of 123.40. After struggling a lot in the previous years, Dhoni finally showed glimpses of his return back to form in the last year but with once again a year’s break, it will be difficult for him to play the same brand of cricket he once made famous.

More than his batting, his captaincy is what’s going to be crucial for Chennai in the upcoming season. There’s hardly any cricketer who reads the game better than Dhoni and his quality to act according to the situation is what makes him a legend of the game. Thus, more than his batting, his captaincy skill is what’s going to be really important for CSK.

The captain of the previous season Ravindra Jadeja was removed from captaincy in the mid-season and later because of his injury, didn’t participate any further. The rumour of him leaving the franchise was quite loud during the trading window but ultimately, the Indian all-rounder decided to stay back despite multiple offers from other franchises.

In 10 matches he played last year, the 32-year-old scored 116 runs at a strike rate of 118,37. This proves how terrible he was in the previous year and thus will be gunning to return back to form in the 16th edition of the tournament. With the ball, Jadeja picked up five wickets, which is way below his standard.

The all-rounder is currently injured and missed the T20 World Cup for India. He will be making his return to the India squad for the Test and ODI series against Bangladesh. 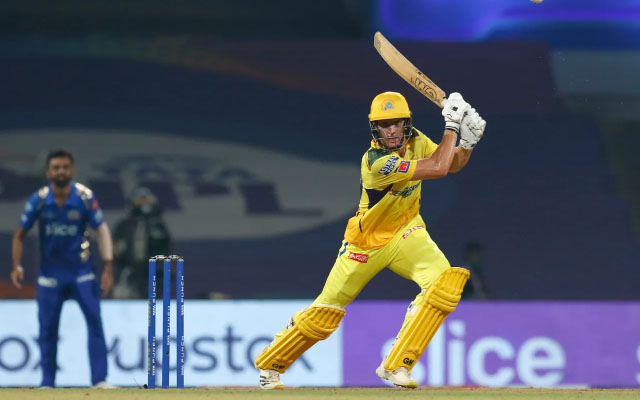 Dwaine Pretorius is likely to fill Dwayne Bravo’s void in the upcoming IPL. However, the South African international is yet to prove himself in the tournament.

Playing just six matches for Chennai Super Kings in the last season, Pretorius scored 44 runs with the bat and picked up six wickets. His economy of 10 is very high and that needs to change in case he wants to be a regular member of the playing XI. However, he is likely to get more opportunities with the bat in the coming season, courtesy of his brilliant strike rate of 157.14 in the previous year.

The 33-year-old, in the last one month, didn’t play a single game and his form before that is also a matter of concern. However, he can be extremely dangerous once he gets going and that’s where CSK would want to cash in. After missing out on the IPL in 2022, Deepak Chahar also missed the ticket to Australia for the T20 World Cup. Thus, the cricketer will be hungry for success and most importantly, would aim to get into the national squad for the ODI World Cup in 2023.

Chahar returning back to Chennai Super Kings will once again make him the leader of the bowling unit. He was terrific with the ball in 2019 and to his advantage, captain MS Dhoni can bring the best out of him ahead of the World Cup. His pedigree for batting is also something that is encouraging and that will help Chennai batters to play an aggressive brand of cricket as their batting runs deep.

His current form with the ball has been average. In the T20I series against South Africa, the pacer picked up three wickets from three matches and his spell against the Proteas in the first T20I at Mohali proved his class with the ball. If he manages to keep up with that, Chahar can help Chennai win their fifth title in history. The 22-year-old Sri Lankan spin wizard will be very crucial for Chennai especially because of the turning pitches in Chepauk. He has the capability of being a runaway match-winner and under MS Dhoni’s guidance, he’ll only get better in the upcoming season.

In the 9 matches he played for CSK in the last year, Theekshana picked up 12 wickets at an economy of 7.46. Being the lone premier spinner in the squad, the Sri Lankan will also have the responsibility of delivering for his team.

Talking about his current form, Theekshana picked up 9 wickets in the recently concluded T20 World Cup and was very economical in the process. If he manages to stay in such a form, Theekshana can be one of the contenders for Purple Cap in the next season. Mukesh Chowdhary was Chennai’s best bowler in the last edition of the tournament. The pacer was very instrumental with the new ball and alongside Deepak Chahar in the coming season, Mukesh can be extremely dangerous.

In 13 matches he played in the 15th edition of the IPL, Mukesh notched 16 wickets at an economy of 9.32. He is someone who can pick wickets at regular intervals but in the same way, leaks a lot of runs. This is one such area where he needs to improve in the coming season.

Talking about his current form, he has done reasonably well in the Syed Mushtaq Ali trophy but the wickets have dried up. He also didn’t play a lot of cricket in the middle and that could be one of the factors but there anyway remains a lot of room for his improvement.