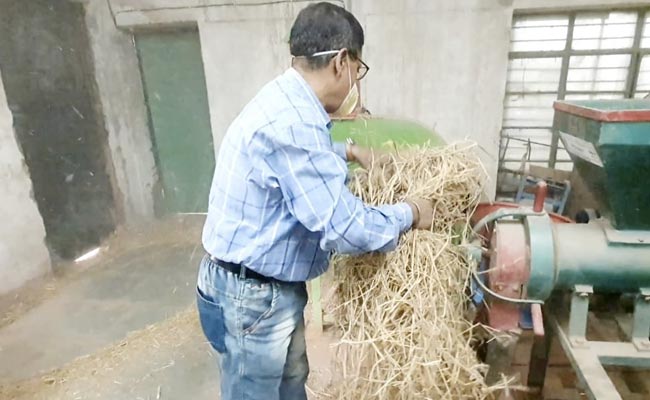 Every year in many parts of the country, especially in and around Delhi, as soon as winter sets in, the havoc of pollution is seen due to stubble burning. The level of pollution in Delhi increases due to stubble burning. The smoke of stubble covers not only Delhi, but the area around it for several kilometers, but the Council of Scientific and Industrial Research in Madhya Pradesh has found a solution for this, it was also displayed in the International Science Festival held in Bhopal. About 150 million tonnes of agro-waste is produced in the country’s farms, of which the share of stubble is about 55 million, every year its smoke swells the lungs of Delhi and its surrounding area, but CSIR’s Advanced Materials and Process Research Institute in Bhopal ( Researchers at AMPRI have developed a technology to convert straw into hybrid wood which is 30% cheaper and 20% stronger than conventional plywood.

CSIR-AMPRI Chief Scientist Ashokan Pappu said that polymers and stubble are needed to make this, we are thinking of making an industry cluster in Punjab Haryana, it can be made in different thicknesses, it can also make a limited board, we can make high Produces quality and lustrous finished composites that utilize 60% straw in a polymeric system. It is much better than particle board and plyboard. We talked to many stake holders of Punjab and Haryana to recycle the straw, we have also applied for patent in India and America.

In 2010, CSIR scientists were working on the pollution of fly ash coming from thermal power plant in Singrauli and surrounding areas, during that time this technology was invented, now it is being used on stubble. Professor Avneesh Kumar Srivastava, Director, CSIR-AMPRI said, “Here we work on composites in such a way that these panels become a replacement for plywood, the whole process is done at room temperature, that means it does not require much energy.

It has been tested as per BIS norms, wood from straw can be used to make doors, false ceilings, architectural wall panels, partitions and furniture. This will also generate employment and increase in the income of the farmers. This technology has come out of the lab in the 8th International Science Festival organized in Bhopal, it is expected that it will be in the market in the next 2 years. The technology license of this product has been given to the industrial unit based in Chhattisgarh and it is expected that this technology of CSIR will be used. By doing this many more industries will be established.