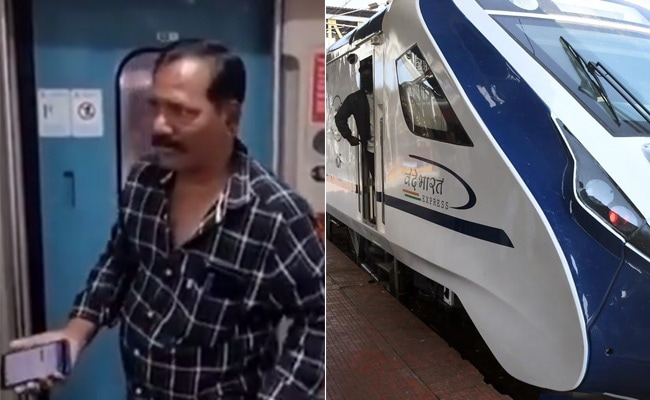 selfie, It is a word that people all over the world are aware of. To show themselves the most special on social media, people take selfies at the place of their choice. This is taken from the front camera. You can take it in the office, at home, in the market, even in the train if you want… However, many people have lost their lives because of selfies. People go to dangerous places and take selfies. One such mistake has been made by a great person of India. One of his videos is going viral on social media. It can be seen in this video that a man got on the Vande Bharat train for a selfie. As soon as he boarded, the train started. When the train started, the gate also closed. The gate could not open because it was automatic. The poor man got upset. This person had to travel 150 km.

Welcome to East Godavari.
Telugu Uncle got onto the Vande Bharat train in Rajamundry to take a picture and the automatic system locked the doors once the train started moving. ,

Loving the way the TC says “Now next is Vijayawada only”???? pic.twitter.com/mblbX3hvgd

It can be seen in the video how a person is trapped inside the train. After watching this video, people are not able to stop their laughter. The Hindu has also published this news. In fact, on January 15, PM Modi started the country’s 8th Vande Bharat Express train between Secunderabad and Visakhapatnam. The Hindu According to a report, when the train arrived at Rajahmundry station, a man got on the train to take a selfie. Then the poor man had to stay in the train.

The person requested the TTE to open the gate, but he said to get down at the next station, Vijayawada. The video of this incident is being seen a lot on social media. After watching this video, many people are giving reactions on social media. One user commented and said – had to travel 150 km for the sake of selfie. Now the lesson must have been learned. While commenting, another user wrote – That’s why I don’t take selfies.