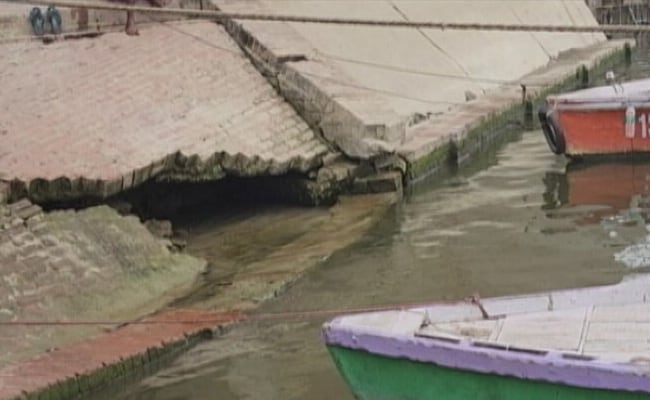 Land is sinking on the ghats of the Ganga in Banaras, the city of Baba Vishwanath. Cracks have started appearing on many ghats of Banaras, while more than half a dozen ghats have started cracking. The story of cracking of these ghats due to erosion of Ganga is not a new one, NDTV has attracted attention about it earlier also but at present no concrete steps have been taken to repair the ghats. NDTV reached various ghats to inquire about this erosion.

Ladders and platforms are seen cracking at different places including Bhadaini Ghat due to the erosion of Ganga. On talking about this, Byte Prof. BD Tripathi, Chairman of Mahamana Malviya Research Institute, says, “When the turtle century was in Banaras, the sand mining work was stopped in the eastern part of the Ganges. The dunes were increasing. The result of the increasing sand dunes was that the pressure of the water of the Ganges came towards the ghats. When the pressure came towards the ghats, then the soil on the upper surface started eroding there. In many places it was seen that a sail had been made inside the ghat. Then many ghats started cracking and stones of many started falling down. Like Bhadaini Ghat, the creaking stairs and platforms of Prabhu Ghat, Brahma Ghat, Durga Ghat, Panchganga Ghat and Lalita Ghat of Banaras can be seen. Tell me, Ganga is north channel in Banaras, so most of its cutting happens towards the ghat.
Which increases further during floods.

IIT BHU Professor Vishambhar Nath Mishra said on the cracks coming in the ghats, “The erosion of Ganga is not new, it has been there since the beginning. In 1993-94, when your channel depth was 12-13 meters, today it has decreased. It has become six meters. Now the channel date is decreasing, it is natural that its velocity will increase, then you will have to take it to the same desk, then you should do dressing and maintenance. If the flow of Ganga ji is less, the depth will be affected. So the velocity will increase. There is a relationship between these two. NDTV has been drawing attention to the plight of the ghats since 2015, but then citing Turtle Century, helplessness was expressed by banning sand mining. But now Turtle Century has also been removed. But the situation is as it is, no work is being done to save the ghats, so the opposition is getting a chance to attack the government.

Congress leader Ajay Rai says, “Gangaji’s water has come like this. You will see that it is cracking all the way. If this is not taken care of, then Kashi Ganga ji’s Ghat will be another example of Joshimath. The government will only help in its event management. We are busy. Dev Deepawali’s full moon program, we will show disco lights. We want to enchant the public by showing just this.” Obviously, the collapsing Ghats of Banaras are giving a big warning. A few days ago, a pit was formed in the middle of the ghat, about 20 meters from the Ganga at Lalita Ghat, which testifies to how many meters the ghat is getting hollow inside. The most beautiful part of Banaras, which is considered to be the oldest city in the world, is the Ghats on the banks of the Ganges, which are slowly creaking the pain of their indifference, but it is a matter of regret that this city is not listed as ‘number one’ in the world map. The people who call it ‘forest’ are not able to feel the pain of these ghats. If this ‘pain’ is not treated in time, then some ghats can get absorbed in the Ganges forever.