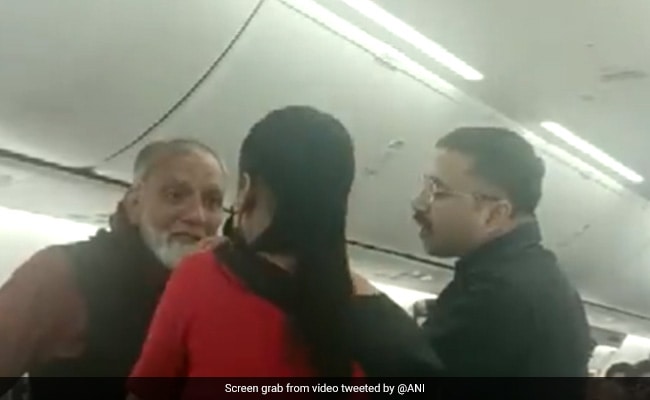 #WATCH , “Unruly & inappropriate” behavior by a passenger on the Delhi-Hyderabad SpiceJet flight at Delhi airport today

The passenger and & a co-passenger were deboarded and handed over to the security team at the airport pic.twitter.com/H090cPKjWV

According to ANI, the incident is of flight number SG-8133 going from Delhi to Hyderabad. The first argument started between the passenger and the crew member over the alleged misbehavior while boarding the flight in Delhi on January 23. After this, the female crew member informed the PIC and the security staff about the misbehavior of the passenger. After this, the allegedly misbehaving passenger and the co-passenger traveling with him were taken down from the flight in Delhi itself and handed over to the security staff.

Please tell that this is not the first case of misbehavior by the passenger in the flight. Last year, a case of a passenger allegedly urinating on a co-passenger in an Air India flight came to light. After this incident came to the fore, Air India had imposed a four-month travel ban on the accused Shankar Mishra. This incident took place on 26 November 2022 in a flight coming from New York to Delhi.

News agency ANI had reported that the airline has banned Shankar Mishra for four months for urinating on an elderly woman in an Air India flight. This incident in New York-Delhi flight had spread anger across the country.

Shankar Mishra allegedly urinated on a 72-year-old woman in flight. He was arrested from Bengaluru last week, six weeks after his heinous act.