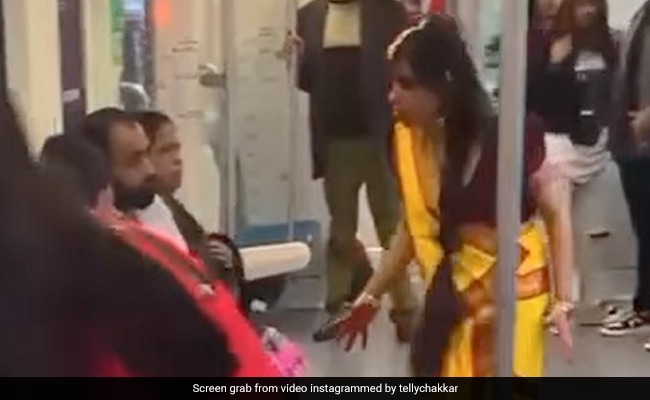 You must remember the famous character ‘Manjulika’ from the movie Bhool Bhulaiyaa. In Bhool Bhulaiyaa, Vidya Balan slayed her performance in the character of Manjulika. In such a situation, a video is now going viral on social media, in which a girl is seen in the metro in Manjulika’s getup. In the video, you can see a girl walking in a metro compartment in Manjulika’s getup. During this, she is also seen trying to scare people. Although it is not yet known where this video is from.

After the video of this girl roaming in the metro in Manjulika’s dress went viral, people are giving funny reactions on it. While some people are calling this video funny, some have raised objections on it. Commenting on the video, a user wrote, ‘How hard the poor girl had to work for a seat’. So on the other hand, another wrote, ‘The condition of the man sitting on the seat reserved for women has worsened’. Another user has written, ‘It is not right to act like this in a public place. Action should be taken on this. Many such comments have come on this video.

Let us tell you that Akshay Kumar, Vidya Balan, Amisha Patel and Shiny Ahuja were seen in the lead roles in the film Bhool Bhulaiya. Manjulika’s character was very strong in this film. Even after so many years after the release of the film, people have not been able to forget Manjulika. So how did you like this prank, do tell us by commenting in the comment box.