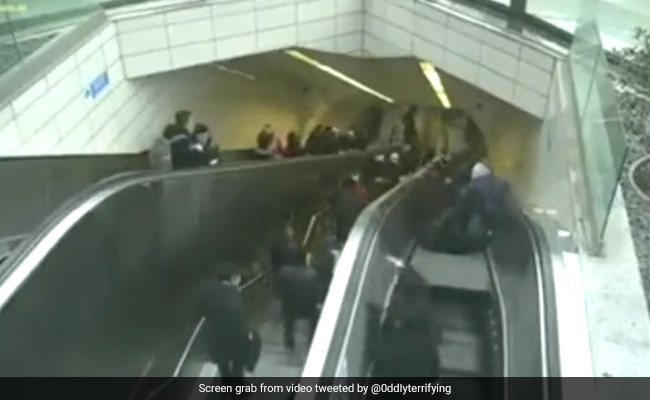 Escalators In Mall Metro: There is a storehouse of videos on the internet. Everyday many videos keep appearing here. Some of these videos surprise, while some videos also alert. Recently one such video is being seen, seeing which your eyes will also be torn apart. In this startling video, a man is seen climbing the escalator, but in the meantime, as soon as he enters inside, he gets badly trapped inside the machine. Seeing this video, even the users are getting goosebumps out of fear.

As such, nowadays there is an arrangement of escalators everywhere, with the help of which a person can come from bottom to top and from top to bottom in minutes. Recently, a video related to this is perplexing people. According to the BBC, the incident took place in February 2018 at the Ayazga metro station in Istanbul, Turkey. In this viral CCTV footage, passengers can be seen getting down from the escalator. Further in the video you will see that the escalator is stopped, from which people are descending. During this, when all the passengers are getting down, suddenly the escalator starts moving.

It can be seen in the video that due to some technical issue, a gap is created in the stairs of the escalator, due to which a person gets trapped inside it. People are gasping for breath after seeing this video going viral on the internet. This old video is once again attracting the attention of people on the Internet. At the same time, a person identified as Mehmet Ali Eric was told that he was trapped inside the escalator for an hour. Many passengers came forward to help him, but failed.

It is being told that, to help the person, the fire fighters reached the spot as soon as the information was received and the person was saved. Meanwhile, as soon as the person was taken out, he was taken to the hospital for treatment at the first opportunity, so that his wounds could be treated. According to the Istanbul Metropolitan Municipality (IBB), the broken escalator was reportedly marked with a warning notice.

This video has been shared on the social media platform Twitter with the handle named @0ddIyterrifying. Seeing this video, the air of good people is getting tight. This video has got 68.9K views so far, while hundreds of people have liked this video. Users who have seen the video are giving different reactions on it. One user wrote, ‘I had no reason to be afraid of escalators, but now I am.’ Another user wrote, ‘The escalator has silenced me, next time I will use it thoughtfully.’ The third user wrote, ‘From now on I will use the stairs.’