The Sydney Sixers Women will face Hobart Hurricanes in Match 54 of the Women’s Big Bash League (WBBL) 2022 at the North Sydney Oval on Sunday, November 20. Both sides have had contrasting fortunes in the tournament so far.

The Sixers are comfortably placed at the top of the points table, having won 10 of the 13 matches with 21 points to their tally at a superior net run rate of 0.710 and they head into this contest on the back of an 18-run victory against Sydney Thunder in the city derby.

The Hurricanes, on the other hand, have also been consistent as they occupy the third position in the table having registered seven victories to their name from 13 matches and have 15 points to their tally at an NRR of 0.543.

Hobart head into this fixture following an eight-wicket loss against the Adelaide Strikers and they would be hoping to make amends with a win under their belt. Hobart Hurricanes were convincingly beaten by Sydney Sixers by eight wickets in the reverse fixture.

The wicket at the North Sydney Oval is one of the best batting wickets of this tournament where the batters have made merry so far. The bowlers will need to toil hard in order to get timely breakthroughs. Both teams will be looking to play to their strengths. Therefore, the captain winning the toss could bat first.

Alyssa Healy might have failed in the Sydney derby, but she has already scored 303 runs in this tournament and has a big match temperament. The Australian wicketkeeper-batter can be impossible to stop once her innings takes off and therefore, the Hobart Hurricanes would want to get rid of her early.

Kate Peterson has been one of the most consistent bowlers of the WBBL 2022, and has also succeeded in providing timely breakthroughs for the Sydney Sixers. She was the key performer against Sydney Thunder as she finished with figures of 3/27 from her four overs at an economy of 6.75. She would be expected to showcase yet another consistent performance. 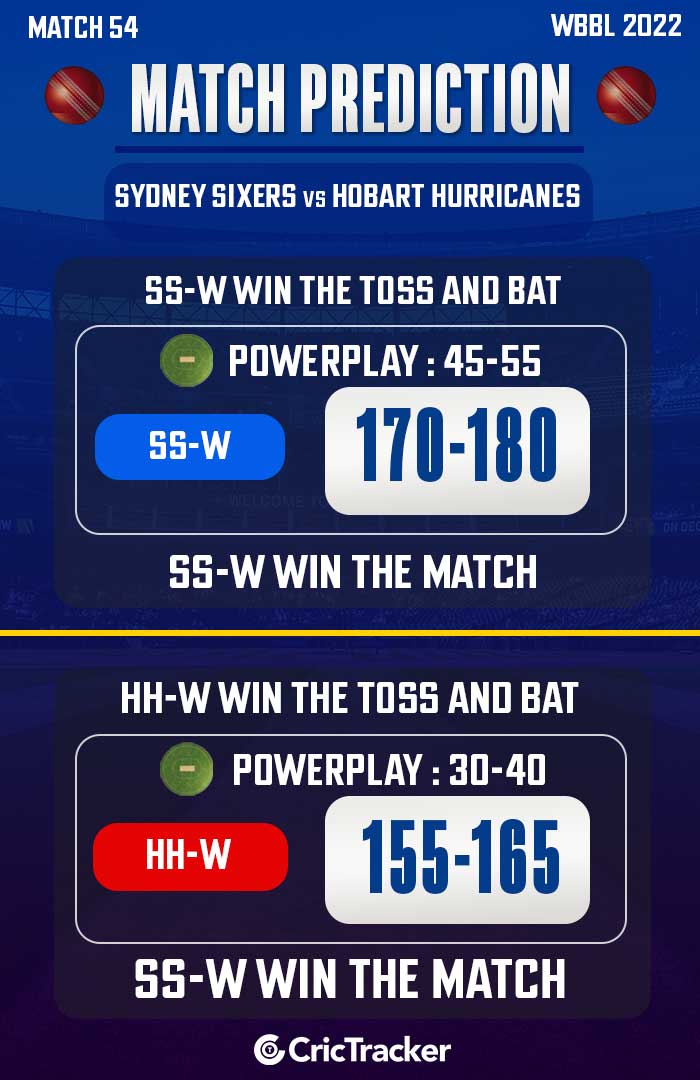